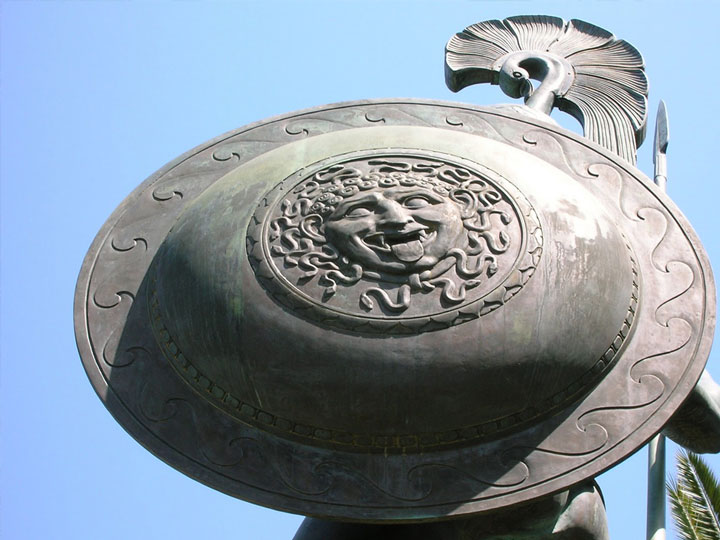 Corfu Achillion Palace: The Achillion Palace is ideally located in the picturesque village of Gastouri. This magnificent Palace was built in 1890 exclusively for Elizabeth (Sissy), the former Empress of Austria. The palace used to serve as the summer retreat of the Empress. Unfortunately, Sissy the Empress passed away in a rather tragic manner when she was brutally assassinated in 1898

in Geneva and the palace was deserted till the year 1907 when it was bought by Kaiser Wilhelm II of Germany. The palace is located in a place of mesmerizing beauty with Corfu coast down below, which still has the jetty from where the Kaiser would embark on his pleasure cruises. The Palace is not only renowned for its classical features. The impeccably landscaped palace garden is absolutely top class and makes for a picture perfect setting. Legend has it that the Empress fell in love with Corfu, so much so that she ultimately decided to build a residence that she could call her own. The palace is located at the spot where the manor of the renowned philosopher Petros Armenis Vrailas stood. Empress Sissi was also captivated and awestruck by ancient Greek legends and mythology. Her favorite was Achilles on whose honor she dedicated the palace. The Palace garden is replete with rather artistically sculpted statues of the pantheon of Greek Gods and Goddesses that makes for a truly mythical setting. During the time when the palace was occupied by the Kaiser, he is said to have removed the magnificent statues of Achilles and additionally constructed the House of the Knights with the sole reason of housing his battalion on Corfu. Even the palace garden was relandscaped according to the whims and fancies of the Kaiser. The palace was given the status of a Public building after World War II. Visitors to the palace can marvel at the exquisite mural positioned right at the reception enclosure which rather artistically portrays Achilles carrying the dead body of Hector. The popularity of the Achillion Palace also comes from the fact that the famous James Bond movie For Your Eyes Only was shot at this magnificent palace.